Entertainment Exchange is extremely proud to book Alain Nu at his twice weekly performance at the Watergate Hotel. Below is an article from The Washington Post written by Joe Heim on February 28th:

Alain Nu, 52, is a magician and mentalist and the author of “State of Mind: The Man Who Knows Reveals the Secrets of Mind Over Matter.” He performs regularly at the Watergate Hotel, Madam’s Organ and events in the Washington area.

You bill yourself as “The Man Who Knows.” What do you know?

I know that while it might be scientifically hard to prove, everyone is connected in a strange, mysterious, invisible way. And I try to offer that to my audience. To give them the experience of what it is to truly feel that they are connected to the people around them. I also know that pretty much anything that you think about can become a reality.

That’s not necessarily true. I think you can become a great singer by first believing that you can. 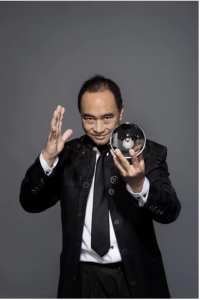 My daughter would disagree. She’s heard me sing.

You would simply need to have that desire just as I had the desire to become a great magician. If you’re spending a whole lot of time not believing the things that you want, then those things aren’t going to come into existence.

How did you get started in magic?

When I was 6 or 7 years old I knew I wanted to be a great magician. I was essentially an Asian kid growing up in America, and everyone saw me as different. And so I started to take an interest in those things that embraced my difference. First I was interested in paranormal and strange phenomena and crazy stuff that people didn’t understand. My dad worked at the Library of Congress, and he was sort of my Google at the time. He worked at the greatest library in the world, and he brought me books about everything from illusions to ceremonial magic to fortunetelling.

You describe yourself as a magician and a mentalist. What’s the difference?

Magicians are people who explore impossible realms. So things disappear and then reappear in impossible locations. Magic is an exploration of understanding how to create these impossible experiences so that when people see them, there’s this wow factor. How can you take that signed card and make it appear in a lemon? Magicians love to explore these absurd notions. Magic communicates to the audience that things aren’t always what they appear to be. Because, obviously, if they were, that signed card couldn’t appear inside the lemon. With a mentalist, there’s a different form of communication. A mentalist creates an experience that feels as if it is real, and so when a mentalist performs something it usually has to do with the powers of the mind.

A lot of mentalists don’t like the word, but I like it because what I do are tricks. I’m creating a trick. What else could they be if I’m performing it for you? But the tricks that I do can be very, very deep and may actually manifest something that is very real. And they give the audience the option of believing it into existence – or not. Oftentimes I don’t even know why that thing took place. There’s a gray area in which I ask the audience to believe in it. And when it works, it’s perfect, it’s a beautiful thing. I want to experience the inexplicable just as much as my audience does.