Skip to content
Jazz Update
 (2)
Write a review Review
Info Audio Photos
The Jazz Update band features some of the top players and singers on the east coast, who deliver compelling performances in concerts, festivals, clubs and corporate events. Their repertoire ranges from straight ahead jazz like Duke Ellington and Miles Davis, to their cutting edge original compositions. The Jazz Update’s two recent CD’s have been on the international jazz radio charts, and have enjoyed widespread critic acclaim. They range from a duo or trio up to five or six pieces with vocals.

Saxophonist Jeff Antoniuk is an internationally respected jazz composer and musician. His recordings and performances are consistently well received by critics. An acknowledged master of the saxophone, he is also the Artistic Director of the Maryland Summer Jazz Festival in Rockville, MD each summer. Antoniuk has been a featured performer and teaching artist at the Edmonton International Jazz Festival and the National Music Center. He is associated with Washington Performing Arts Society (WPAS), and has played and recorded with artists as diverse as Ray Charles, Natalie Cole, Marcus Miller, Najee and Kenny Rogers.
Blues For JD Salinger
Man's Best Friend
Prelude to a Kiss
Stompin' At The Savoy
Sunny Side of the Street - Vocals
Tenderly
Time After Time
Triste - Vocals 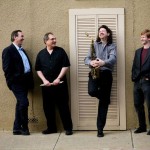